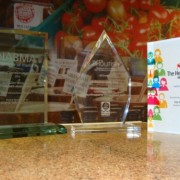 With over eighty different entries for the various sections of the competition and over 102,000 people voting for Britain’s Favourite Market, the City Property Markets team are delighted to pick up this award in recognition of their continued efforts particularly in light of their recent environmental successes through reducing the markets carbon footprint and increasing recycling.

This award is recognition of the hard work and professionalism of everyone on the team and reflects on the progress made in making the markets more environmentally friendly through greater recycling of food waste which in turn is helping to reduce the city’s carbon footprint and contributing to the council’s aim to make Glasgow one of the most sustainable cities in Europe.

We were delight to scoop a second award for our Sustainable Green Markets Project at the Herald Society Awards held on 2 November. This award was presented to reward our initiative that the Herald recognised as having delivered a positive change in contributing to sustainability and climate change agenda.

City Property Markets, a trading division of City Property (Glasgow) LLP, also operate a number of  Retail and Farmers markets across the city as well as managing the largest weekly Car Boot Sale in Scotland.

One woman feeds entire family on £16.60 a week with help from our Sunday market at Blocharin https://t.co/oI7ugIuxqo